Written by Ionut Vornicu on 10 August 2013. Posted in Leaders from Mongolia 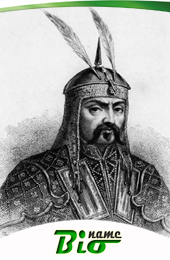 1167 Genghis Hans was born somewhere in Khentii Mountains, Mongolia. He was the founder and Great Khan (emperor) of the Mongol Empire, which became the largest contiguous empire in history after his demise. He grew up within a hostile world: during childhood he assisted to his father’s murder, spent time in captivity, his wife was kidnapped and he always faced to the threat of famine. Suffered traumas and the harsh climate of steppe transformed him into the man who would become a great conqueror within an unrepeatable war, almost indestructible.

1190 He became chief of family’s tribe. Temujin became the chief of what was left of his father’s tribe; charming and daring, he succeeded to gather supporters from all area and then he subjected one by one all opponent tribes. He cruelly exterminated all those that opposed him and he almost wiped out Tatars who had killed his father – he simply killed all those that were taller than drawn cart’s axle.

1206 He was chosen Genghis-Khan. He was the chief of steppes, ruling the territory that is Mongolia nowadays. During a khurihai, traditional meeting of tribe leaders, he was proclaimed Genghis-Khan, “Supreme Leader” and “Prince of All Territories that Lay between the Oceans”.

It was a watershed moment in history; steppe nomadic tribe-men, fast horsemen whose main weapon was the arrow bow and who lived in yurts, were going to invade the stage of history with a terrifying force. Genghis Khan had the good fortune to rule during a period when China was crushed by internal turmoil, so he took advantage by this situation a conquered Tangut Xi Xia Kingdom.

1219 He invaded Horesm province. Provoked by one of his protected caravan’s mutilation, Genghis Khan  went to Horesm, the new Islamic Empire that had been established in West, conquering important cities like Samarkand and Bukhara, surrounding Caspian Sea and making his way by the sword until Black Sea’s shores. Fights against Muslims brought to Mongolians the reputation of wild and scary. In North his generals were going ahead in Russia and in South, towards Jabul and Peshawar.

His enemies described him as a cruel and vengeful killer – “they came, they destroyed, burned, killed, robbed and left”, said a Muslim – but, in the same time, he was also a sophisticated and smart leader and a political of elite. He quickly adapted the army made almost of Cavalry units, making the necessary changes in order to wage wars of siege and it was told at a moment that he would have changed a channel to conquer a city. He established a united Mongolian nation who would survive eight hundred years; he appointed a governor to take care of justice, he introduced records’ keeping, reduced Mongolian language to a Turkish alphabet and encouraged education, practiced religious tolerance and learnt from Chinese people the importance of culture and from Muslims that the cities can represent an important source of wealth. He established his capital at Karakorum and organized network of post houses in order to communicate faster everywhere within his large empire.

His military spirit was based on the capacity to adapt quickly to different circumstances. He combined physical strength with flexibility; he knew when and who to ask for advice. In the end, his biggest army proved to be military ability mixed with the pure terror that his arms could provoke – both psychological impact that this terror’s threaten provoked and the cruel reality of its presence.

1227 Genghis Khan was leading a military campaign in China when he got sick and died, on the 18th of August. His body was brought back to Mongolia where he was secretly buried. Those who took part in the funeral were also killed so that nobody would find the tomb of the great conqueror. So, Genghis Khan’s resting place is still unknown.[1]